You can know anything. It's all there. You just have to find it.
-Neil Gaiman

Alright.
I know it's been a few weeks past Easter.

Still, I have WITNESSED the power of the Lord.

Or some minor gods and goddesses.

Here's what happened. Make of it what you will.

Easter Sunday (In Minnesota), aka: One of the first NICE days of spring. Blue skies. Warm sun. I was happy to be working in the yard.

Me (working in the yard): Oh my God, this looks terrible.

Me (thinking): Okay, calm down. You can do this.

Me (thinking): Stop being so dramatic!

Me: You stupid brain! This IS dramatic.


The lawn looked like shit. Literal shit. Because we now have a dog, there was literally SHIT everywhere. Soggy and inflated and spreading E. Coli into the grass. Another fun fact: My dog loves to eat shit. Literally. Bunny turds. It's like she thinks they're M&Ms or something. After eating her fill of rabbit poop (good fertilizer BTW) she will then want to jump up and lick your face.

So after an afternoon of trying to clean up the yard, I cried. Muffled cries of defeat. I usually do them in the shower where no one can hear. True story. I think I might have whined, "I can't do this. It's too much."

Somebody apparently heard me. I hope it was Jesus.

Next afternoon, when I got home from work, I got the dog and took her out for her walk. I walked past my front yard. It looked strangely clean. And tidy.

I looked at my Karl Forster grass. It had been shorn down. I knew I hadn't done that.

Strange, I thought, as my mind started to bubble.

We went for a walk.

I came back. Walked through the back yard. All the old leaves in the beds were gone. I started to feel weird. I looked around. Toys and balls were in one heap. Not scattered. The window well covers had been moved.

Holy Shit! They broke into my house!

They had sucked all the crap and deitrus out of the window wells.

It took ten more seconds. Now my brain was at a rolling boil.

Somebody upstairs was listening.

What really happened was that a lawn clean-up crew (yes, they exist) showed up at my house instead of my neighbor who'd hired them. We have the same house numbers and very similar addresses. Think: 1234 Maple Road and 1234 Maple Lane (right close by) and you can see how the mistake could happen.

I grinned evilly to myself. Then I felt bad. The new neighbor at 1234 Maple Lane should know!

The next night I saw him walking his dog.

Like a Catholic penitent before a priest, I ran down my front steps and yelled, "Bill?"

"Um, yeah. You don't know me, but I have a weird question to ask you."

"Yeah! I'm still waiting for those guys to show up."

It's also a good idea to be a good neighbor. When you can.

You just have to pay attention.

Because it is awesome.

Well, I had a good reason: I forgot my password. Sort of.

What would really happen? Something along the lines of, "Oh, I haven't posted in a few weeks, I should write something." Then another few weeks went by, a few months. Of course, then it gets to the point where it's embarrassing to bother. "Oh, uh, that blog? Uh, yeah, ummm.... Let's pretend that doesn't exist."

I did.  I rationalized I was busy.

But then the other day I found a journal - the journal I started keeping for my daughter from before she was born. And when I say, I found it, I mean I pulled it out from its very visible spot next to my computer monitor.

And I started reading it.

And I couldn't stop.

I was so happy I had written in it, and also annoyed I hadn't written more. It's amazing what you forget when you don't write it down.

In some ways, this blog is like my own personal journal for myself. I started it many years ago because I wanted to be an author and I figured it would be a good way to practice. After all, no one else out there can write my life but me, right?

Anyway, before I let any more days slip into the abyss (because they really do) I figured to just do it already.

Some things stand out.  Mainly this one. 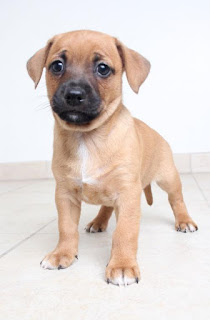 Yes, I was fooled as well by that face. We adopted her May 1 last year and what a year it's been. Full of cleaning up pee and puke and I don't know how many plastic pieces of toys, dolls, pencils, flip-flops, socks, lamp cords, furniture legs, garden hoses, soccer balls, wiffle balls, baseballs, any balls really, that this furry monster hasn't destroyed.

That actually is her middle name: Monster

Somehow we've made it through the first year. And my rugs and carpets are (mostly) intact. 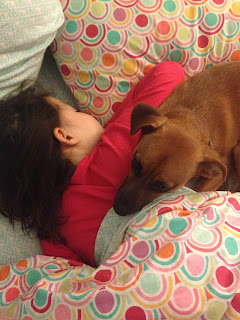 A few other things that happened this past year.

My second book came out!
My first book was a finalist for an award.  Recently, I found out in won another award!
I went to visit a friend I hadn't seen in 16 years!
We had so much fun that I visited her again a month ago, and this time brought my family with!
I recently earned my purple belt in Kung Fu!

This is where it's getting hazy, and this is what I mean by writing things down....A whole year can slide by, and the older you get, the easier it happens.

So I promise to write more useless crap on my blog for your entertainment. And mine.

And now I need to go and write something in my daughter's journal. Something monumentally profound. Something like the joke she told me the other day.

Sena: You want a brownie?

Sena hands me a letter E colored brown and laughs. "Here you go!" 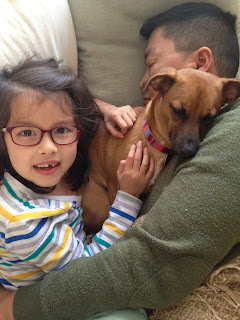 The Prince and Me

I don't recall the very, very first time I heard of Prince. Or what the song may have been that I first heard on the radio. It was 1984 and I was nine. Not old, but old enough.

What I do remember? With burning, vivid clarity?

It was rated R.  And it was going to be on TV. At 10:30 pm, when they showed the rated R movies. Me and my brother stared at the listing in the TV guide.

We knew what RATED R meant.

Naked people doing things they do when they got naked. I wasn't quite sure what, exactly, (not discuss gas prices or the Dow Jones industrial average or if butter was better than margarine. Answer: YES! that's for sure). But I knew I definitely wanted to find out!

I wasn't interested in "adult language" because at nine I could already curse with the best of them. Preferably under my breath, out of my parent's hearing.

No way in hell were my parents going to let me and my 10 year-old brother watch a RATED R movie. I usually had to be in bed by 8pm anyway. I wasn't even allowed to watch Dallas or Dynasty or Falcon Crest (The Love Boat was apparently tame enough, though).

Then we solved the problem.

We would watch it when we stayed over at my grandma's house. Something we did often on Friday nights so my parents could be alone or something. Ugh. I now just realized why. Maybe not to discuss gas prices....

Anyway, our grandmother pretty much let us do what we want. Stay up late? Sure, why not. Watch TV? No problem. Eat ice cream for dinner? I'm not stopping you.

We knew our 80 year-old gramma didn't know who Prince was, or what the movie was about. Didn't matter that my brother and I didn't really know, either.

Because did I mention before? NUDITY.

So after Johnny Carson and ice cream sundaes I bravely suggest watching a movie. I was hoping my grandma would say, "Okay, I'm going to bed."

She didn't. She said, "Oh good. What's this nice movie about?"

So the movie starts. It's a little weird, but cool.  My brother and I are sitting on the sofa, tense as criminals in a holding cell. Something, we knew, was going to happen.

The scene. Apollonia must "purify" herself in the waters of Lake Minnetonka.

I still remember the outfit. Black leather jacket and pants.

Then she ripped it off.

I actually screamed. (I was so mortified)! Also, it was sorta of awesome in a thrilling way.

But mainly I was mortified because I was sitting next to my grandma.

My brother had his mouth open, silent. Amazed probably.

But I had to make it stop. I was terrified what I might (and my grandma) see next.

In the fastest I ever moved (Mach 2 at least) I jumped up, ran, and turned the TV off. It was an old TV, with knobs. I turned it so hard I heard a weird crack.

My grandma seemed stunned. "Why did you turn it off?"

It was then I realized that she might have nodded off and hadn't even seen the gorgeous naked lady standing nakedly in front of Prince.

My brother, to his credit or stunned stupidity, was still motionless and silent. Like he had had a stroke or something.

And then it was over. The end. We went to bed.

I finally saw all of Purple Rain when I was twenty-one and living in Minneapolis. I had met my soon to be husband at the world famous music club First Avenue, and of course Matt had his own VHS copy and let me watch it.

It was a great movie.

Thanks, Prince. You were definitely one of a kind. 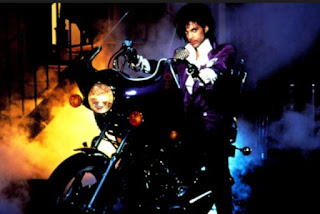 Older Posts Home
Subscribe to: Posts (Atom)
Author
Illustrator
Cat-herder
Wino
Movie Nerd
Book Lover
Not necessarily in that order.
I write fiction - all kinds, for people ages 3-103. Especially people who have a sense of humor.
I also write a lot about my personal life.
Prepare to be mildly horrified.
I am represented by Hannah Bowman of Liza Dawson Associates.

Stuff I Read - Informative and Entertaining